Bill Hybels: Why Sexual Harassment is not a Distraction

When Willow Creek founding Pastor Bill Hybels stepped down from ministry last week, he said he was doing so because the alleged sexual harassment claims against him were becoming a "distraction" from the ministry of one of America's largest churches. 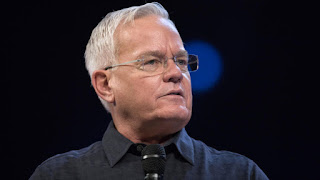 "It has been extremely painful for Lynne (his wife) and I to see this controversy continue to be a distraction," he told the congregation on April 10 in South Barrington, Ill., a Chicago suburb.

Maybe this tells you all you need to know about how sorry Hybels really is.

Hint: Not so sorry.

His move, to hastily apologize for the way claims of sexual misconduct affected his church, including claims that Hybels solicited sexual relationships with several (married) female ministry leaders - is well-taken out of the playbook of powerful men confronted with evidence of sexual misdeeds.

"Ahem," Hybels seems to say. "My work is holy. Who are you to distract me from my holy and important work? All of this talk of sex is merely a distraction from the many good things I do. Now, let me return to my work. These little women do not matter."

In his comment and in his minimization of his own actions, Hybels is diminishing the personhood of the women with whom he worked. In characterizing their discomfort and the inappropriate nature of the way he behaved -- not to mention the way he makes a mockery of his own marital vows - Hybels is seemingly saying that his work is more important than the women with whom he works.

He is saying, in essence, that because he raises lots and lots of money for churches, and he sells a lot of books, and maybe he even sends a lot of people on a lot of mission trips to a lot of impoverished places ... that the way he treats other people doesn't matter.

"The flock is fine," Hybels seemingly says. "Just look at our facilities. Don't worry about the single lost sheep."

For Jesus, the one was as important as the whole. Jesus cared about each person, as an individual -- because Jesus knew that each person was created in the image of God: male and female God created them (Genesis 1:27).

Jesus tells this story to his disciples about the importance of each person - and their unique intrinsic value:


"Which one of you, having a hundred sheep and losing one of them, does not leave the ninety-nine in the wilderness and go after the one that is lost until he finds it? When he has found it, he lays it on his shoulders and rejoices. And when he comes home, he calls together his friends and neighbors, saying to them, 'Rejoice with me, for I have found my sheep that was lost.'"

This text is traditionally told about the power of repentance, but it's also about the power of One: about the unique intrinsic value of every follower of Jesus. For Jesus, the flock doesn't justify - but rather for Jesus justification comes by each individual person and how he or she has treated other individuals.

Jesus would not say that tending to the fair and kind and God-centered treatment of each individual in the church is a distraction. He would not say that investigating the abuse of power and the breaking of marriage vows are distractions. He would instead insist upon the centrality of treating and loving each individual person as God has first loved us, (John 13:34).

It seems possible, especially in light of the allegations, that Hybels didn't view the women he worked with as persons, truly. He seemed to view them as objects, of lesser intrinsic value than himself. Did he worry about their families, their husbands, their ability to do ministry next to a man who had propositioned them sexually? Did he think about how it might impact them to consider that their position in church leadership had been given to them because of sexual attraction rather than God-given talent and vocation.

I hope it's not true, as it is in many cases of sexual misconduct among powerful men, that Hybels simply didn't care how they felt; only knowing that it would gratify him to be in a physical relationship with these beautiful, God-gifted ministers of the Gospel.

I hope it's not true as well, as it is in so many cases of sexual misconduct among powerful men, that Hybels also didn't care how his wife felt. Bill and Lynne Hybels have been a beacon of hope about the possibility of gender equality and egalitarianism among American Evangelical churches.

That's why all this is hard. Hybels had been one of the "good guys." His wife, Lynne, championed "MeToo." Hybels named a woman to succeed him to lead Willow Creek.

But then I read the way Hybels responded to the allegations. He called them a distraction, he refused to admit to any wrongdoing or to apologize, and my worry is that - despite all the good Hybels and Willow Creek have done for American Evangelicalism - Hybels too doesn't care about the women.

Like so many other powerful men in America, it seems he cares primarily about himself.

This is heartbreaking, because for Jesus - how we treat other human beings is anything but a distraction.

It's the center of the Gospel.


When the Pharisees heard that he had silenced the Sadducees, they gathered together, and one of them, a lawyer, asked him a question to test him.

"Teacher, which commandment in the law is the greatest?"

This is the greatest and first commandment.
And a second is like it: 'You shall love your neighbor as yourself.'

On these two commandments hang all the law and the prophets."

The next time you hear a church leader - or a politician, for that matter - claim to be a Christian, all the while claiming that sexual misconduct allegations are a distraction: remember this text.

Then ask: how is this person loving God?

How is this person loving their neighbor, their accuser?

And does it involve wealth and power?

And just how Biblical is that?

How far afield the American Church has fallen from the ministry of Jesus.

Author's Note: Having served my first pastoral call not far from Willow Creek in the Chicago suburbs, I know "Willow" a bit, and I have some connections to Willow among friends and colleagues. Some of them have been dismayed by this article, and the way it seems to point personally at Hybels - while others recount instances of their own witnessing of Hybels' sexism and sexist language, and are glad these allegations have been made public.

I've thought and prayed over this a bit, and here's the point I want to make here. Yes - for me - Hybels has been one of the "good guys." His work toward promoting gender equality at Willow and in American Evangelicalism has been important to me, and I've been grateful for his voice in those arenas. Willow does much good. And yet - I was disappointed by Hybels' response, which is why I wrote about it here. It just seemed so dismissive. Like the women didn't matter. I expected - and hoped - for more from Hybels. I'm still hopeful, as I told a Chicago pastoral colleague yesterday, that maybe Willow can do this differently. That maybe Willow can set an example.

He said - and I agree - that it would start with two things:

1) An admission directly from Hybels about where he erred and what he did wrong. A plea for forgiveness from the women.

2) An opportunity for the women to share how they'd like Willow to move forward in repentance and healing: to be the church in a new way. To do it differently than anyone else.

So perhaps despite my biting words - because yes, I was disappointed - I do still cling to hope that Hybels - and Willow - could do this differently. That will be my prayer.