The worst part about the prospect of Senator Roy Moore - and I had a lot to choose from - might have been that this man was stealing my faith, my God.

He got to stand there, in his Cowboy hat and self-assured smirk, quoting Scripture and representing American Christianity to the world. As if Jesus was all about power, influence, and white male supremacy. While he smeared his accusers and the journalists who told their stories. While he made the church a laughingstock, no place for a mom like me.

The effect it had was a chilling one, a silencing one. A slow erosion of faith and belief until Jesus was nothing but a straw man, born in 19th Century America, perhaps a slaveholder and definitely a gun owner.

It is one thing to demean an entire race, an entire sex, an entire orientation - to assume that hatred alone will win you a seat in the greatest deliberative body on earth. It is another thing to do so in the name of Jesus, who spoke not with a bullhorn but in a whisper, through the voices of women - who met him at the well, prayed with him, and became the first witnesses to the resurrection. Whose greatest statement was giving up his life for the love of those who hated him.

I watched as Moore stood there last night, his con over, his ridiculous Western outfit changed into a suit and tie. Saying God was in control - which God is - and imagining God was on his side - which God is not - and then quoting from the Bible, Psalm 40:

"We've been put in a hole ... and I waited patiently for the Lord ... that's what we've got to do ... he ... heard my cry, brought us out of a horrible pit out of clay and set my feet on the rock and established my goings and put a new song in our mouth. A hymn praising to our God. Many shall see it and hear it and shall be moved by that, if you will."

If you remember, the Devil too quoted Scripture. Not that Roy Moore is the Devil. But quoting the Bible doesn't mean you know the Bible, or the God it speaks of.

The Psalms are the refuge of the dying, the grieving, the sick, the impoverished, the oppressed, the ashamed. Stop me when you hear a category that fits Roy Moore.

Recommended to a U.S. Military Academy by his congressman, an officer in the Army, a man who used his position as district attorney to seduce teenage girls - including his wife, whom he first met as a teenager. A man who used religion as cheap pageantry: who hung the 10 Commandments in his courthouse but worshipped the other gods of power, lust and money. A man who attended church on the Sabbath but coveted other men's positions and power. A man who lied about his past, breaking the ninth commandment. A man who took the Lord's name in vain by invoking it to uphold racist and sexist practices, which a God who values the uniqueness of each and every human life, black or white, male or female, straight or gay - that God would never call Roy Moore's judgments justice.

Psalm 40 is for Terri Sewell, the first African American woman elected to Congress from Alabama. 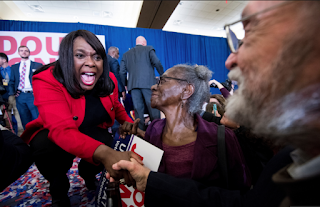 Sewell's grandfather was a Baptist minister. From him and from her church she learned the Psalms. The Psalms that empower the weak; that give voice to the voiceless; the Psalms in which redemption comes only after repentance or oppression.

In 2011, Roy Moore suggested that getting rid of all amendments after the first 10 would "eliminate many problems" in the way the U.S. government was structured.

For Roy Moore, Terri Sewell was a problem.

Terri Sewell is a woman. She didn't get the right to vote until the 19th Amendment.

Yet Terri Sewell, and women and African Americans all over Alabama, persevered. Clinging to a faith that could raise a man from the dead, they sang "We Shall Overcome," and non-violently campaigned for the right to be fully human. God put songs into their mouths, and the world heard them.

Lurking beneath the pageantry and veneer of Roy Moore and his compatriots' shallow commercial Christianity - a substitute for worship of white America - a deeper, more Biblical, browner, Middle Eastern Christianity has always uncomfortably coexisted. Under the surface. Beneath the headlines about Faith in America.

Too often the alternative to Moore and his flunkies was no faith at all.

"Court me or be an atheist," he'd yell, beckoning to teenage girls at the mall. "To follow God is to follow me."

This is a false choice.

While the champion of white Evangelicals, the thrice-married, no-need-of-forgiveness, communion-shunner Donald Trump was tweeting sexual innuendo about a congresswoman, that same congresswoman was - guess where - at Bible Study!

If you want to be Christian in America, there is another choice! You don't have to give up God when you throw off Roy Moore.

The black women who voted 97 percent against Roy Moore have to be reading the headlines about Evangelicals' big loss and thinking: they lost but God won! God won. (And we're Evangelicals, too).

See where do you really think God is - even if you don't believe, even if it seems implausible - just grant me a moment's exercise ...

Where do you think God is? Riding in on that pompous horse with pompous Roy Moore? Spewing hatred toward gay men and women? Lying about his past?

That, Roy Moore, is the pit!

Your pit is shallow and your God is coming not to rescue you but to call you out of your own God-forsaken pit and into repentance: for smearing the name of Jesus and spreading lies, hatred and fear.

God was in Selma on Dec. 12. Holding the hands of black ladies as they walked to the polling places. Descendants of slaves. Silenced. Abused. Forced to submit. Forced to bow down. Forced to walk to the back of the bus and today they would remind Roy Moore that God would not allow them to be silenced anymore.

America is not going back, they told him.

They told us all.

I was in Alabama last year. Raw and beaten down. A month after Donald Trump was elected President, and I found out so many of the Christians I knew and loved supported him and ignored his hateful rhetoric.

Weakened and afraid, I had flown to Alabama to meet Bryan Stevenson in Montgomery at the Equal Justice Initiative. Stevenson is telling the story of the nearly 4,000 lynchings that took place across the South from 1877-1950. Each death is a heartbreak, a life lost, a reason to be silent, afraid.

The images were harrowing, the stories devastating and yet -- here we were in Montgomery, Ala., and the stories were being told. Case by painstaking case, African American men and women who'd been wrongfully imprisoned were being set free. Justice, on its slow and righteous pathway, was being done.

The seeds Stevenson has planted - the work of Terri Sewell - the simple refusal to sit down and shut up - you could see it rising up on Dec. 12 in Alabama.

Drawn out of a miry bog and set upon a rock. Steps secured. Footing steadied.

A new song of praise put in our mouths.

A new old song first sung by slaves, some in Alabama, about this Jesus who would come to set us all free.

Remember Jesus? He came to turn our world upside down.

Perhaps it is us white American Christians today who need to be set free. Set free from the strictures of money and power and patriarchy and racism that have imprisoned our faith into a tiny box of civic religion, no good to anyone but abusers and penny-counters and social club organizers.

Perhaps this Christmas we need to be set free from the lying "Evangelicals" who have been seduced by power and influence, who have lost and betrayed and sold the Gospel for a seat at the foot of the Oval Office.

May we do our part to make sure a Roy Moore never speaks for us again.

May we hear the voice of Jesus ringing out of Alabama today, from our African American brothers and sisters.

Go tell it on the mountain. God didn't lose in Alabama. God won.