The Saints in my Life

I keep seeing them, or thinking I see them.

The other night it was at Target, rushing to grab a bunch of bananas for a preschool Halloween party the night before Halloween.

I thought I saw her. Standing in the distance, rushing through the doors with a dignified wool coat and peaceful gaze amidst the candy crush.

Looking closer it wasn't her after all. Another woman who looked a bit like her. I was here and she was there.

It used to happen to me at our church in California, where I'd walk through the doors after service and out onto the patio where people drank coffee and ate doughnuts. Surely that was her, chatting with a friend, calmly, quietly, balancing coffee and purse and iced doughnut with grace.

She was always graceful. Grace-filled.

But it wasn't her after all. I was there and she was elsewhere.

It has happened to me enough now that I realize it must not be a coincidence, that God is somehow placing these misplaced recognitions in my life. So that I might believe and remember their presence. So that I might know they go with me, and so does God.

You probably have those moments, too. The misplaced recognition so visceral you start to put your hand up to wave, then lower it sheepishly. Never mind.

I guess perhaps it happens more to me now, having lived in more than 10 different cities all over the country in the past 10 years. A misplaced wave here, a sheepish hello there. It happens often.

This was different. Almost like a mirage. Happening often at church, but other times in common places: shopping at Target or walking to the park.

And only with a few people, who all shared commonalities that seemed beyond coincidence.

All former church members where I'd served as pastor.

All with an otherworldly sense of grace and dignity, an unhurried calm and undeserved kindness. Unruffled, and yet not untouched by grief and loss. Wives, mothers, friends, daughters, aunts, leaders, helpers, teachers. Moments shared together when we were at the same church.

In California I always used to think I saw Nancy after church. Nancy, from my church outside Chicago. Nancy, who moved to the community shortly after I did, who joined the church with her husband: their stalwart appearance in suit and pants, almost regal-like, always a comfort in the cold and unfamiliar Chicago winter. Her husband, who would die while I was there of complications of dementia, a brilliant engineer who had suffered greatly because of this disease, the same disease that killed my grandma, and yet who Nancy always helped come to church with a dignity befitting his former life and mind. Hers was an unselfish love, a love that tumbled over late nights awake with thrashing dreams wrought by his traumatized mind, a love that had crossed oceans and continents, a love that wasn't perfect but had been tested and won, over and over again.

Nancy was always so kind to me: a first-call pastor with often no clue what to do or how to minister, a mom with a 1-year-old son and no family in the state. I remember when she and her husband brought us dinner: not just a main course but dessert, and sides, and he gallantly walked up our treacherous stairs and over the ill-placed baby gate, striking his foot, suffering and still giving, still loving, bolstered by her love.

She was always grateful to me: kind beyond measure when we prayed by his bed in hospice. She didn't know that as I ministered to her, she ministered to me. Sharing stories of youth. Of sewing with her mother in Wisconsin. Of children near and far. Of hardship and a steadily beating love and faith, that climbed theological heights as it endured and blossomed and resurrected time after time after time.

So perhaps when I left that church, heading to Southern California, far away from the blustery Chicago winter, I needed her. A reminder that I could be Pastor. That's when I saw her, perhaps, standing in her Sunday best, outside the adult education room. When I thought I saw her, I know now that maybe for a moment I did, though she was not physically there.

Nancy is not the only one. Since leaving that beautiful, beaming California church where I grew and loved and our family became 4, I see people again from that church. Often I think I see Diane.

A person too with great love and quiet grace. The truth is that even in a large church, as our California church was, there are still a small number of individuals who keep things going, and that was Diane. Serving meals at funerals. Cleaning up after retreats. Sorting food at the food shelf. There almost without being asked. A dignity and love. An ineffable quality of peace: not a veneer of Orange County glamour but a lasting echo of resilience, perhaps a quality only earned in later years: something I needed and admired as a young mom in my 30s.

Diane I thought I saw at Target. Jennie I thought I saw at church. Another Diane I brushed up against in the grocery store. Sometimes it's men as well though it often seems to be women, women I admired, women I loved, always from church, always with faith as a rock of their lives, despite inevitable loss, grief, and everyday struggle.

Sunday is All Saints Sunday in the church, the day we remember the saints of the congregation - the saints of the world. If you're Catholic you have and know many saints. For others of us the term is more ambiguous, though generally you think of those who have died.

I don't think that's wrong. On All Saints Sunday I light a candle for my family members who have died. I grieve, and I give thanks for them and pray for their eternal peace and presence with Jesus.

Still, All Saints is not only for the dead. In his letters to the churches, the Apostle Paul - and other letter writers in the New Testament - wrote to the saints. Writing to the Romans and the Corinthians, Paul says they are "called to be saints," putting sainthood in the category of something we strive for as we live, not merely something we attain as we die.

I like this idea of living saints. I think that's why I see these women, or think I see them, at church or at Target or walking down the street. I think saints - living saints - are part of the presence of God and the Holy Spirit that goes with you in your life.

I like it because I've left many places, many churches, many people who I've loved, and I like to think that part of each of them comes with me, by the power of the Holy Spirit. This All Saints Day, I think God is reminding me by putting them viscerally in my path - so that I can't ignore all the incredible ways God has been present in my life through other people, through the saints of Chicago and Orange County, and Las Vegas and Florida and San Francisco and Kansas City.

Saints are a reminder to me that God is not only present with us ambiguously, through the wind or the silence or the sound of worship. Saints remind us that God is present in people. God became incarnate - became present - in humanity through the incarnation of Jesus Christ. After Jesus' resurrection, by the power of the Holy Spirit, that gift of incarnation happens, incompletely, again in the saints who we meet. And don't get me wrong, you all have a bit of saint in you, even you - though perhaps from what I've seen it can especially grow and blossom as you get older, if it is not diminished by bitterness or fear.

We do saints a disservice when we force them to be canonized, silenced, only accessible to us from beyond the grave. Saints are more complex than that. They are not only male or female or black or white or North American or Middle Eastern or Asian or Australian or European or South American or African. Saints are the people in your life who God sends with you, by the power of the Holy Spirit, to remind you of God's presence.

Even if they aren't physically with you, you might see them from time to time. I know I do. 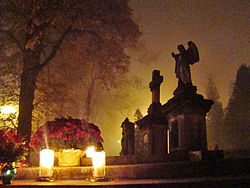