Every time other powerful men send out this sympathetic tweet:

As a father of daughters ...

And somehow the focus always remains on those who've been abused. As if somehow we think the onus is on women to stop it. As if somehow this terror, this scourge of sexual abuse and sexual harassment affects only women, only daughters - and does not traumatize and destroy the very fabric of our being: our families, our relationships and our nation.

This week, maybe like you, I posted #MeToo on social media, admitting, however shamefully, that I too had encountered sexual harassment. (As a former sportswriter and current pastor - two male-dominated professions - this can't be terribly surprising).

I didn't tell my stories. I didn't even want to remember the details, though they flooded back in snapshots, seconds, sayings, feelings of fear and upset stomach.

And no, nothing happened to me like happened to many of the women who found themselves alone in a hotel room with Harvey Weinstein or any of the men listed above. I feel as though I have to say that, so no one will look at me differently or wonder secretly if I've been somehow tainted. And isn't that horrific: that the biggest shame, fear and ostracism we reserve not for abusers but for those whom they abuse. I sense the shame in myself even as I post #MeToo, to somehow separate myself from the embarrassment of sexual harassment or abuse.

But I'm fine. I mean #MeToo but I'm fine. I'm great. It didn't matter. I expected it. It came with the territory: the locker rooms, the fields, the churches. It's the price I paid. I never said anything. I ignored everything and I kept my guard up and kept doing my job. I mean there was that one time but that was my fault too. Let's not make this about me.

It's awful right? This pervasive fear of being outed not as an abuser but as someone who has experienced it. I am so grateful for the community of women online and sharing of #MeToo, but it still doesn't feel entirely safe, does it?

As long as we keep focusing on naming women and talking about daughters, we miss the point.
It's time for men to be named. For men to say #MeToo. I committed sexual harassment.

I mean, I'm grateful. Thanks for caring, I guess. I suppose it's preferable to much of the instruction I received at the hands of some churches. Watch how you dress. How you act. What you wear. What you say. Modesty is your responsibility. Guys can't help themselves.

Changing a pervasive culture of sexual assault is not up to men with daughters.

So I'm a mother of sons. Here's my response:

As a mother of two sons, I am horrified by the epidemic of sexual abuse and sexual harassment perpetrated by successful, prominent American men. As a mother of two sons, I will tell my sons that stopping sexual assault and harassment is up to them: not up to girls and women. I will insist that no one has to do what my sons want them to do simply because my sons are in a position of power: being fairly affluent, white, able-bodied young men. I will insist that my sons realize that women are every bit as competent as men: that women can do what men can do, and that the ideas of proscribed roles for men and women are social constructs. My sons may see many traditional roles happen in our family, where I have a flexible work arrangement and am home with them many days, while their dad leaves every morning for the office downtown. I will remind my boys that those roles are a choice, and that the choice to care for others is a valuable and worthwhile choice, one which does not demean or lessen the one who chooses it.

My husband and I will correct our boys if they make disrespectful comments about women or girls. We will foster their friendships with girls, and we will let them see mommy and daddy having many platonic relationships with people of the opposite sex, including lunches and dinners with coworkers, mentors and friends of the opposite sex, without even considering a sexual side to these meetings.

We will teach our boys that being sensitive is OK, even when I find myself cringing at my oldest son's deep well of emotion.

We will attempt to keep our sons from valuing toxic masculinity, which keeps them sealed off from their emotions, and encourages them to act out in violent or insensitive ways.

As a mother of two sons, I will not be surprised if I hear that my son mistreats a woman or a girl, or if my son is involved in sexual harassment. I will remember that even though he is my beloved son, he is also a product of his culture, and I will care for the women and girls, and I will not attempt to discredit their truth, even if it harms my son.

As a mother of two sons who is also a Christian, I will teach my boys the witness of Jesus. Jesus, who had many female friends and many platonic relationships with women. Jesus, who prevented a woman from being stoned by reminding all present of their own (greater) sins. Jesus, who chose to first protect persons and then uphold the law. Jesus, who must have been thinking of the many oppressed women of his day, when he warned against mistreating "the little ones" among us, and said that those who did should be drowned in the sea. 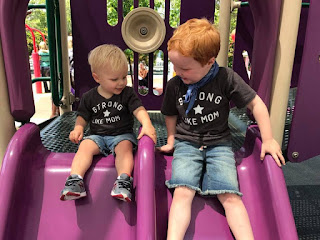